AM brings Minister to Cynon to talk inclusive play 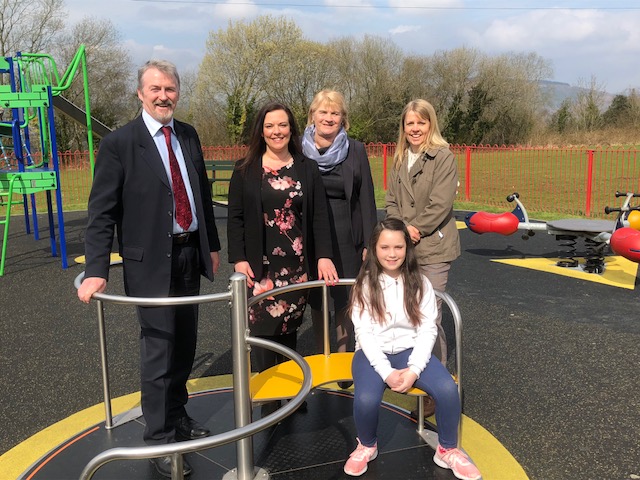 Cynon Valley AM Vikki Howells has brought Minister for Children Huw Irranca-Davies AM to Cilfynydd to discuss how the Welsh Government can best promote inclusive play opportunities for all children.

The local Assembly Member made the offer for the Minister to visit her constituency to see an example of good practice during a Senedd debate to discuss Mrs Howells’ proposal for a new law on inclusive play. Mr Irranca-Davies duly visited Oaklands Play Area in Cilfynydd, which RCT Council had upgraded in 2016 to make it more accessible for children with disabilities.

The Minister and Mrs Howells met with RCT Council Deputy Leader Cllr Maureen Webber, and Play Manager Lisa Austin who spoke about the Council’s ongoing work to improve play areas, with £3 million having been invested since 2015/16. The plans means that by April 2019, 106 play areas in the county borough will have been improved.

The Minister and Mrs Howells also met with 10 year old Mia Thorne and her mother Karene. Mia, a resident of Cilfynydd, had asked for the play area to be improved to make it more accessible and officially opened the improved facilities in October 2016. Mia spoke about the difference the investment had made to her ability to play with her peers.

“I am really grateful the Minister found time to visit Oaklands Play Area with me, to see how RCT Council upgraded and improved the site to make it more inclusive for children to play.

“During the debate on my proposal for a new law on inclusive play, we had the chance to talk about a range of initiatives to better promote awareness of the facilities that were available, and this visit gave us the chance to further consider this.

“Wales was the first country to legislate for the rights of children to play, but I will continue to campaign so that children with disabilities can enjoy equal chances as their peers to access good quality play opportunities”.

Minister for Children and Social Care Huw Irranca-Davies AM said:-

“I’m delighted to have this opportunity to see the difference investment in accessible play facilities can make to our children and young people.

“Oaklands Play Area is a great example of ensuring all our children can access these facilities.

“It was also a pleasure to meet Mia Thorne and to recognise her achievements. It’s wonderful to see our young people so engaged in the issues that matter to them.”

“Oaklands play area is just one of the many play areas which the Labour-led RCT Council have invested in, to ensure all our young people and their families have access to high quality and accessible play areas.”

“This year again, we are investing £615,000 to upgrade a further 20 play areas across Rhondda Cynon Taf. This means that over the last four years, the Labour-run Council will have invested around £3m in over 100 play areas right across the County Borough.”

“One of our core public commitments is to ensure that our young people have access to safe play areas with modern and accessible equipment, allowing families to benefit from healthy outdoor activity at no charge, and this is something we are delivering through the continued investment in our play areas.”