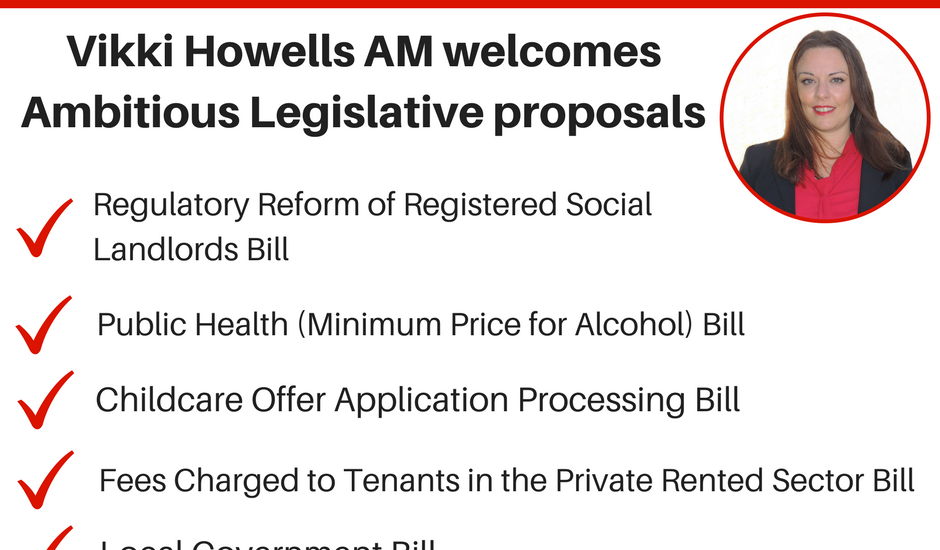 Cynon Valley AM Vikki Howells has welcomed the new legislative programme announced by First Minister Carwyn Jones for the year ahead, saying it will improve lives in Cynon Valley and across Wales.

The new priorities cover 5 key areas that will be targeted to benefit Welsh citizens. The proposed new laws are:-

The Public Health (Minimum Price for Alcohol) Bill will propose a formula for calculating the minimum price for alcohol, based on its strength and volume, and enable local authorities to enforce their powers and bring prosecutions. Evidence shows a direct link between the availability of cheap alcohol and harmful drinking levels.

The Welsh Government is also planning to introduce a bill to stop landlords and estate agents from charging unfair, up-front fees to tenants and prospective tenants in the private rented sector.

Over the next 12 months, the Welsh Government will also introduce a bill that will pave the way for one of its key pledges – 30 hours of free childcare a week for working parents of 3 and 4 year olds.

The fifth bill will aim to reform local government in Wales. It will establish a new relationship between the Welsh Government and local government, create greater transparency in decision making and ensure greater collaboration through mandatory regional working arrangements.

“The Welsh Government’s legislative priorities for the next year are very important to Wales and try to combat some critical, but difficult to tackle, issues.

“In particular, the Public Health (Minimum Alcohol Price) Bill will impose a minimum price on alcohol to combat the availability of cheap alcohol which only encourages excessive drinking.

“Another key policy from the Labour Government aims to deliver on the 30 hours of free childcare for working parents of 3 and 4 year olds pledged in our manifesto. This is a vital policy to enable parents’ access to this free childcare which will greatly benefit families financially.

“Overall, these key policy targets are a huge step in the right direction to making Wales a better place to live and they will also have a direct impact on people’s lives.”