The news that the Welsh Government will be exploring ways to take action against people who park on pavements has received a warm welcome from Cynon Valley AM Vikki Howells and Richard Jones, Principal Consultant and Founder of Aberdare-based disability support group Accessible News

In a speech to an Active Travel conference, Deputy Transport Minister Lee Waters AM said an expert group would be established by Welsh Ministers to explore ways of clamping down on pavement parking across Wales.

Inconsiderate pavement parking can cause problems for the safety of pedestrians and cyclists, with people using wheelchairs, prams and pushchairs often being forced out into the centre of the road due to pavements being blocked.

The Deputy Minister said that the expert group would also consider more widely the issue of illegal parking, especially around schools, and reaffirmed the Welsh Government’s intention to make 20mph the default speed limit for residential areas in Wales, rather than the current 30mph. 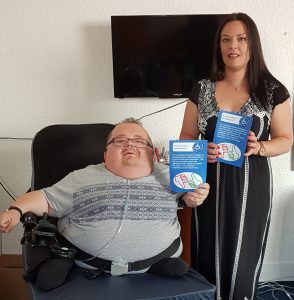 “Many constituents contact me with their concerns over the safety issues posed by pavement parking, telling me of how they can face near misses as they are made to leave pavements and step into busy roads to continue on their journey.

“With so much being done to promote Active Travel, such as this year’s £30million to improve walking and cycling routes, it is right that the Welsh Government looks at the bigger picture and makes sure that our streets and roads are safe for all people travelling, regardless of the methods they choose.

“As the Deputy Minister said in his speech, these measures are not about penalising car users, but rather redressing the balance of power in our urban environment and I look forward to the report from the expert group in due course”.

“For a number of years, Accessible News has been running a campaign in conjunction with South Wales Police to educate people about the effects inconsiderate parking can have on people with disabilities, the elderly, children and other pedestrians.

“Parking inconsiderately by mounting kerbs and limiting the access on pavements, or obstructing drop kerbs, can lead to big repercussions not only for people who could be stuck, because they are unable to pass on a pavement but also drivers who could be fined.

“The announcement from Welsh Government that an expert group will be set up to look at pavement parking and illegal parking is excellent news.  This will hopefully tackle the widespread problem that occurs throughout Wales, which affects such a wide cross-section of society”.