Local Assembly Member Vikki Howells has called for Cynon Valley residents to make themselves aware of rule changes that make it easier for councils to take action against people who give their waste to someone “in good faith” who then fly-tips.

The new guidelines, approved by Assembly Members, could see households facing a fixed penalty notice of £300 if they hand their waste to people not authorised to handle it.

The changes come as councils reported more than 35,000 incidents of fly-tipping in 2017/18, lending Welsh taxpayers with a £2 million clean up bill. Currently, residents can be issued with a fixed penalty notice if they fly-tip their waste themselves.

A Welsh Government report suggests that 60% of fly-tipping incidents originate from domestic households – often the result of the householder failing to check where the waste will end up allowing an unauthorised person to take it away. 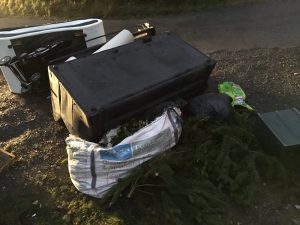 “I want residents to be fully aware of these changes.  Fly-tipping is a scourge in Cynon Valley, with nearly 3,500 incidents reported in RCT in 2017/18, and has a real impact both on our environment, and on our ability to enjoy it.

“It also costs a considerable sum to clean up. In 2017/18, RCT spent over £165,000 on cleaning up fly-tipping, the second highest figure in Wales. That is a charge on taxpayers, and takes money away from our public services.

“We all need to take more responsibility for how our waste is disposed of and this means asking questions of those that offer to take it away.

“RCT Council recently increased the fines it can charge on people who fly-tip. This rule change is another important intervention to deal with this social problem”.

The plans passed by the Senedd  on Tuesday mean a fixed penalty of £300 – reduced to £150 if paid early – could be given to households that breach their “waste duty of care”.

Councils will be able to keep the money from the fixed penalty notices (FPNs) to put towards enforcement and clear-up costs.

Receipts from FPNs issued by Natural Resources Wales will be paid to Welsh ministers.