Michelle, who lives in Cwmaman, was nominated to attend the Queen’s Garden Party on 31st May by her local AM Vikki Howells, in recognition of her campaigning to raise awareness of Sepsis.

Sepsis, also known as blood poisoning, is the reaction to an infection in which the body attacks its own organs and tissues. It kills 44,000 people a year in the UK.

Tragically, Michelle’s 17 year old daughter Chloe died of Sepsis on New Year’s Eve 2014. Since then Michelle has worked tirelessly to improve understanding of the warning signs of Sepsis, and what can be done to tackle this preventable condition.

Michelle attended the Garden Party along with her father, John Sawyer.

“Michelle is a real inspiration, and has worked so hard to promote awareness of Sepsis so that no other family will have to go through what she has faced.

“It was a pleasure to nominate her for the Queen’s Garden Party”. 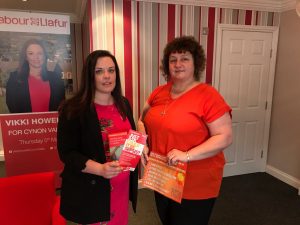 “I was overwhelmed but honoured to be nominated to attend the Queen’s Garden Party. It was an amazing experience for both my Dad and myself. The day was filled with bitter sweet moments because of the reason why we were there and Chloe was in my thoughts all day.

“I’d like to thank Vikki Howells for the nomination and also for helping us raise the awareness of Sepsis”.

For more information on Sepsis, please visit the Sepsis Trust’s website at https://sepsistrust.org/