Valleys Taskforce hears from Cynon residents on their local priorities

An important initiative by the Welsh Government to meet the needs of Valley communities in a more coordinated and targeted way recently held a public evidence session in Mountain Ash, at which Cynon Valley residents were asked their priorities for their local area. Cynon Valley AM Vikki Howells joined people from across Cynon to discuss how the South Wales Valleys could be best developed in the twenty first century.

The Valleys Taskforce, chaired by Minister for Lifelong Learning and Blaenau Gwent AM Alun Davies (second from left in picture above), was set up by the Welsh Labour Government after the Assembly election in May 2016 to develop a fresh approach to improving prosperity and delivering change in the South Wales Valleys.

Other members of the Taskforce include RCT Council Leader and Mountain Ash Councillor Andrew Morgan, Cardiff City Region Board Chair Ann Beynon and Cwm Taf Health Board Chair Dr Chris Jones (from right to left in above image), alongside representatives from Welsh Government, Coleg Y Cymoedd, the HE sector, the TUC and private business.

At the evidence session in Mountain Ash Bowls Club held on Monday 27 February, dozens of local people gathered to give their views on how the Valleys could be made an even better place to live and work. 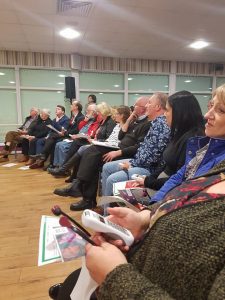 “A number of the Welsh Government priority policies such as the Cardiff City Region and the South Wales Metro have the potential to be game changers and really improve economic performance across the Valleys, including here in Cynon Valley.

“The Valleys Taskforce represents the Welsh Government bringing these strands and more, like health, education and support for small businesses, together, to develop a holistic, joined up approach that puts improving the Valleys at the heart of all areas of government.

“Listening to Valleys communities, asking what they want to see in their area, is a crucial part of this. I was glad the Taskforce came to Mountain Ash to hear from local residents, and am grateful to all the local people who took the time to come along and put forward their ideas and suggestions”. 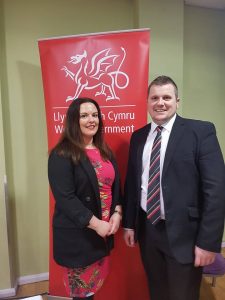 Above: Vikki Howells AM with RCT Council Leader Andrew Morgan