Cynon Valley AM Vikki Howells joined women from all across Wales to protest against the UK Government’s unfair decision to change the age at which they can access their state pension. 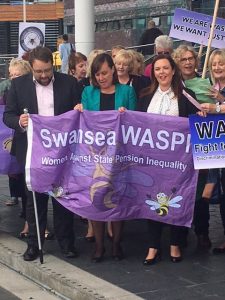 As part of a national day of action organised by the Women Against State Pension Inequality (WASPI) campaign, Vikki Howells addressed the crowd outside the National Assembly for Wales, including campaigners from the Cynon Valley constituency.

The UK Government brought forward changes to equalise women’s state pension age, but did so giving affected women little notice and with no chance to make alternative plans.

Despite calls to bring in fair transitional arrangements, the UK Government has refused to help the thousands of women affected.

“With Labour politicians from across Wales, I joined the women of the WASPI campaign who are drawing attention to the unfair way in which women born on or after 6 April 1951 have been penalised.

“I was honoured to be ask to speak on behalf of Welsh Labour Assembly Members, as this is an important cause and we must do all we can to get justice for these women.

“One of my first acts as an AM was to table a motion in the Assembly supporting the WASPI campaign, and I will raise it with the Welsh Government again.

“Although this is a UK Government decision, we must do all we can to maintain pressure to get them to see sense.

“Many of the women affected are facing a ‘double burden’, being expected to look after parents who are living longer and also help provide childcare for their grandchildren, and now they are being told they must stay in paid employment for longer.

“These are important social changes which should be informing UK Government policy, but instead this Tory government seems to just not care”.

After the rally, members of the WASPI campaign marched on the Wales Office to present a letter to the Secretary of State for Wales.

More information on the WASPI campaign can be found at http://www.waspi.co.uk/